Episode 4: Can you stand yourself – and the voice in your head? 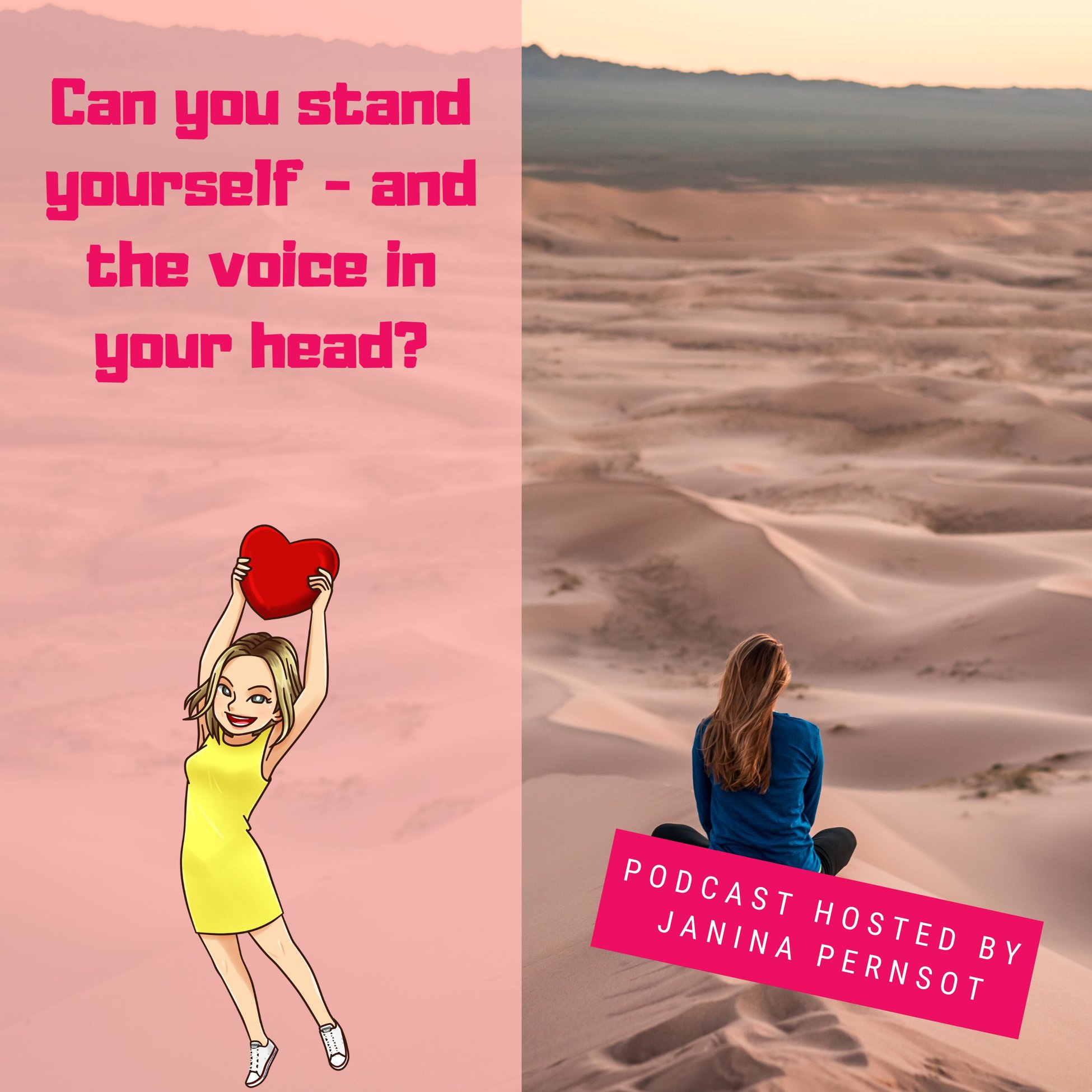 I know enough people that can’t stand the silence.
Rushing from one meeting to the next. They fill their free time with supposed adventures and are always busy.
I can understand that well, I myself was one of them.

Why is it then that we do not like to be alone and prefer to be on the go?

When we once rest or want to rest, we have the impression that our thoughts go round in circles. And there they are: thousands of thoughts.
Whether it just started or whether we are simply quiet enough to hear ourselves: it doesn’t really matter.

Here are a few thoughts that you might hear:
What do I really want in life?
Why am I doing something that’s not making me happy?
I still must do so much stuff …
Help, I can’t do this anymore, I’m so exhausted.
Do I even want to be with my partner?
Did I achieve enough?

What I also find exciting:
Do we like ourselves enough to spend time with ourselves? Do we find ourselves interesting enough?

Related to this I like Byron Katie’s quote from her book “Who would you be without your story“:
“The reason people don’t like to be alone is that they’re alone with their own thoughts. And if you aren’t at peace with what you think, you don’t like the company you keep.“

I myself am an extravert and used to do a lot things – and often with others.
The first time I was really intraverted and calmer was in 2007 when I traveled to Hawaii on my own.
I had just decided not to continue studying mathematics after a few months and suddenly my plan, which was supposed to be for the next several years, was gone. Everything had been so straightforward until then: 13 years of school, then directly continuing with my dual studies. Everything had been planned and timed. After almost four years I had my diploma examination, two days later I had a tibia operation. Immediately afterwards, I looked for an apartment in Cologne, had math preparation lessons and started studying mathematics. Initiated in good time beforehand, of course. And one morning in early December, when I was cycling to the early morning lecture in the freezing cold, it was clear to me that I didn’t want to do that. I mean really not. And suddenly I was in a big hole: OH MY GOD, what am I supposed to do now?

Don’t get me wrong: I’m still glad I did try it. Otherwise I might have wondered my whole life what it would have been like if I had decided to study full-time.

To bridge the gap, I spent two and a half months in a student management consultancy and enjoyed having fun with the people there. And as I started applying, I decided I wanted to refresh my English. During one lunch break I looked at pictures of a language-based travel provider with a colleague and we probably considered Hawaii just because we were being silly. I had never longed to travel and suddenly it was there: Wow, it did look so awesome!

Up until that point in my life, I was always just co-traveling: with my family, with friends, with girlfriends. I never actually cared about the destination and, much to the great amusement of my family, I had often forgotten where I was going to. It was only important to me to spend a nice, relaxing, but also adventurous time with my friends.

And then I was off to Hawaii: Straight from Dusseldorf airport I was on my own and traveled to Honolulu via LAX. And I noticed that I can actually orientate myself well.
I had a specific framework there: I had a “guest mum” and classes in the morning. At the language school, there were mainly Swiss, Japanese and Koreans. As usual, I quickly made friends with some of them and were doing a lot of things together. Until it dawned on me one day: on some evenings I felt uncomfortable, and especially with one girl from my class, I was just doing stuff with only because of one reason: not to be alone. I didn’t even like her that much. Starting this moment, I only did stuff with others in a well-considered manner and I even met a few other nice girls that I hadn’t noticed before. If and really only if I felt like hanging out with these people. I also started doing a lot on my own and being courageous enough to just try it . I often went to the beach alone, read, or just had a drink. I sat alone in cafes, which I still enjoy doing to this present day. I had short conversations with dozens of strangers and was then alone with myself again. In the end, it even helped me to improve my English drastically because I spoke a lot with locals instead of other students whose English was worse than mine or who maybe preferred to speak (Swiss) German in their free time.
Much more important to me was that I could just be the way I really was at the specific moments: calmer, with myself, without wanting to impress the others.

My decision to go to Hawaii was against what many would have recommended. Honolulu did not appear to be the most reasonable way to eagerly refresh my English. In retrospective, it was a great decision: With such short notice and without a visa I could just study 16 hours per week. I didn’t need more; it wasn’t about learning the language – I had done that for nine years at school. I had listened to myself and my instincts and not to what others would have expected from me.
It’s in this vacation that I started to get to know myself in a different way: calm, courageous, adventurous and intraverted. I took a bus across the island in all possible directions and I was really in the mood for discovery: foreign city, foreign continent – and getting to know myself and being there for myself.
Maybe you would also like to invite yourself for a coffee in a cozy café one day.

I wish you a lovely time with yourself.

Be happy & be light

Join my “Love what you do” facebook group to meet like minded people that love what they do.

And you are welcome to check out my homepage. I would love to work with you and assist you to (finally/again/even more) love what you do!

← Episode 3: How you can overcome small fears - or how I learned to ride a bike again in Sahlenburg Episode 5: About llamas and boundaries: learning how not to explain ourselves from the llama lady →